Posted on February 22, 2009 by SusieOfArabia 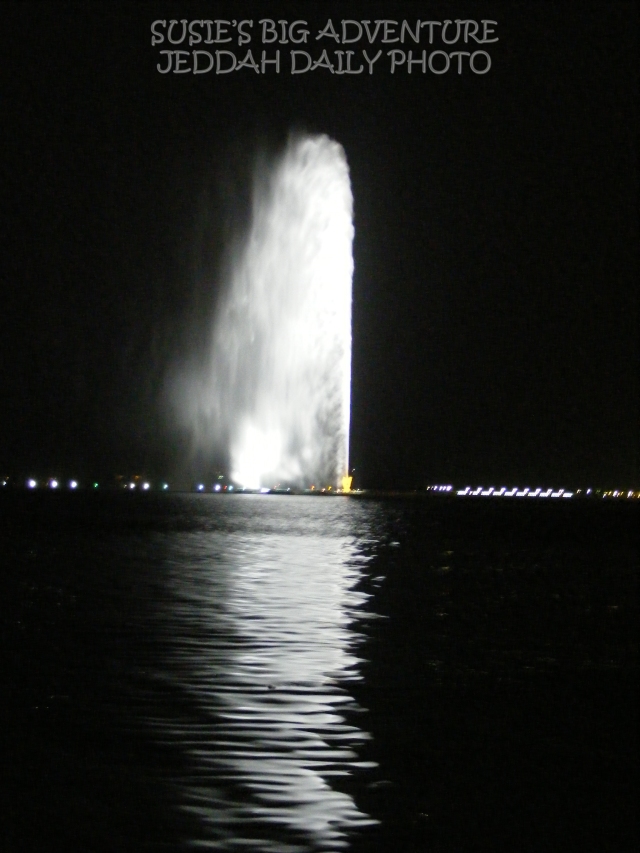 The King Fahd Fountain is the world’s tallest fountain reaching a maximum height of 312m (1023ft). It was fashioned after the fountain in Lake Geneva, however King Fahd felt the scale was insufficient for his liking and insisted on making his fountain even larger. It was built in the 1980s.
This fountain sprays costly desalinated water from the salty Red Sea back into the waters of the Red Sea. If the water were not treated, the fountain’s components would be destroyed by corrosion from the naturally salty sea water. The fountain’s plume of high pressure water spray carried in the air at any given time weighs an incredible eighteen tons and is shot out at a speed of 375 kph! Operating the fountain requires constant oversight by ten full-time technicians. The only time the fountain is ever shut down is for its annual planned maintenance, which takes about three weeks.
It is located off the coast of Jeddah in the Red Sea and is visible for miles from various points in the city and all along the Corniche. When it is lit up at night, the King Fahd Fountain is a spectacular sight. Nearby is the Salam Palace built by King Fahd, which was built on a manmade island in the Red Sea. King Fahd reportedly was quite ostentatious and wasteful during his reign as king. For his enormous palace, he actually brought sand and plants all the way from Hawaii with which to build his palace island.
His lifestyle was arguably more lavish and wasteful than any other ruler of Saudi Arabia, plus he lost millions gambling overseas (gambling is prohibited in Islam). He spent extended periods of time outside the kingdom, enjoying a Western lifestyle while ruling with an iron Islamic fist at home. When his oldest son passed away, King Fahd did not even return to the kingdom for his own son’s funeral.

American woman now living in hubby's homeland of Saudi Arabia
View all posts by SusieOfArabia →
This entry was posted in Landmarks, Photo and tagged Corniche, Red Sea. Bookmark the permalink.