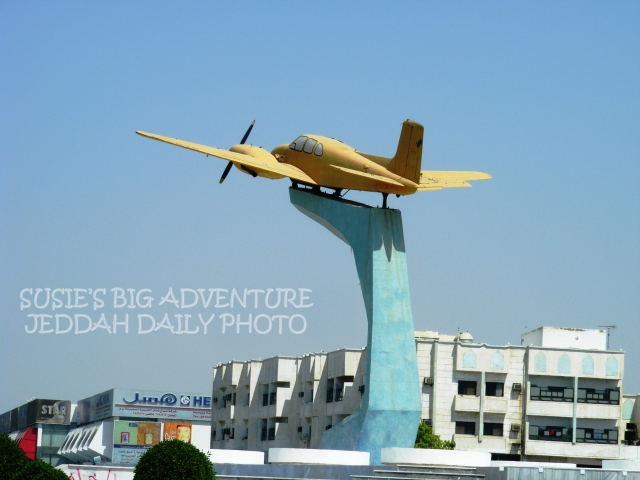 It has been said that Jeddah has enough aircraft monuments to fill a small aviation museum. This particular sculpture is of an actual twin-engined aircraft, which is painted a cheerful yellow and whose plinth is painted a sky blue. Among its other aircraft sculptures are a Vampire jet fighter and a trainer which are housed together in a roundabout in the middle of a very busy intersection. Another is an actual veteran Dakota DC3 which was a gift to the city from Saudia Airlines. This is a relic from Saudia’s early days when their entire fleet was comprised of this plane plus two other similar ones. Its concrete plinth is in the form of fluffy white clouds and rolling blue waves to signify the relationship of the earth, sea, and air. Yet another aircraft sculpture was the personal plane of King Abdul Aziz and its plinth positions it upward in take-off position. This aircraft was a gift given to the King by US President Roosevelt when they met during World War II. These all represent the innovative agenda of recycling objects and materials which was touted by the mayor of Jeddah at the time, Mohamed Said Farsi, for his massive beautification project of the city in the 1970s and 80s.

American woman now living in hubby's homeland of Saudi Arabia
View all posts by SusieOfArabia →
This entry was posted in Art, Landmarks, Photo, Sculptures and tagged Sculptures. Bookmark the permalink.