Posted on October 3, 2010 by SusieOfArabia 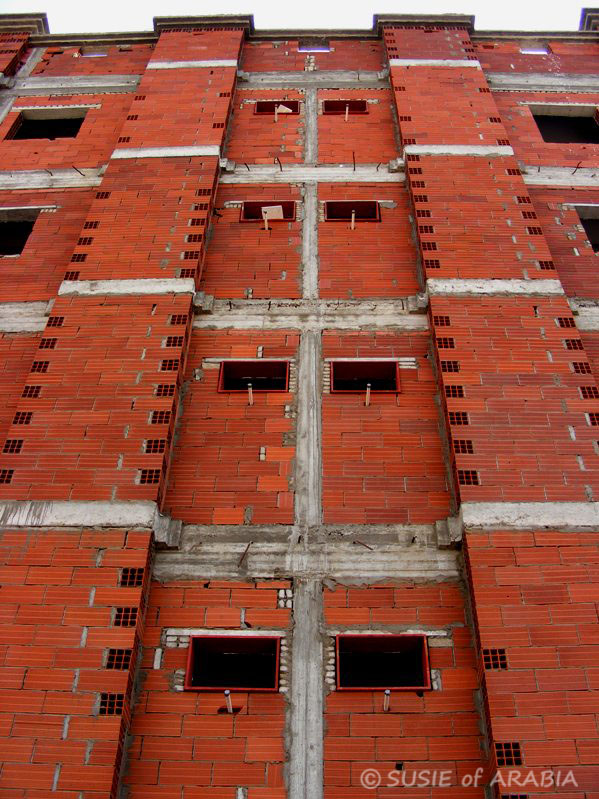 Most of the multi-family residential buildings in Jeddah are built in a similar fashion. I’ve compared them to long train cars lined up side by side lengthwise and stacked several traincars high. The only variations might be how many floors there are and the finishing materials. Other than that, there doesn’t seem to be much creativity in the design or room shapes. The small box-shapes up the front of the building are to house separate air conditioning units. Even though top quality marble or stone might be chosen to cover the front of the buildings, it’s not uncommon for unsightly air conditioning units to be hanging there as well. Another distinctive feature in these buildings (and many private homes as well) is the lack of built in closets in the bedrooms or cabinets in the bathrooms. Nowadays most kitchens do have some built in cabinets, but they are generally lower quality formica finishes.
Jeddah continues to be a beehive of construction with no end in sight. The hard laborers are all imported from poorer neighboring countries in the region, like Bangladesh, Egypt, Pakistan, or India. There is a lot of controversy in Saudi Arabia about their living and working conditions and their pay and treatment.