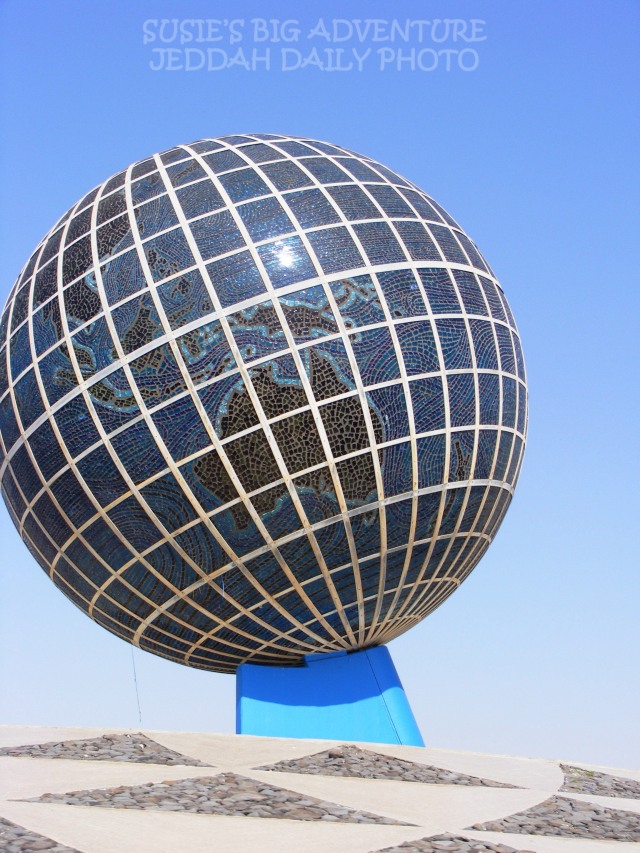 This is one of the most impressive and beautiful works of public art in Jeddah. It is called The Illuminated Globe and was designed by Spanish architect Julio Lafuente, who is credited with creating more than two dozen amazing art pieces for the City of Jeddah. This globe sits in the middle of an enormous roundabout of a very busy intersection, so photographing it is difficult because stopping the car near it to plan a shot is not an easy task. The surface area of the globe itself is an incredible 600 square meters. It is constructed of stained glass and steel and is illuminated from within at night – and it is spectacular when lit. The stained glass and the steel frame were fabricated in Italy at a cost at that time of more than $1 million, not including the cost of the roundabout base it sits on. The design is such that it accentuates the center of the Islamic world – Makkah. Because of the severe heat Jeddah experiences in the brutally hot summer months, the glass and steel construction had to allow for expansion in the heat. There is also a small crescent moon shaped sculpture (a symbol of Islam) which accompanies the globe on the same roundabout. To see what this magnificent work of art looks like when it is lit up at night, please see this previous post.
To fly MORE friendly skies around the world, visit SKYWATCH.